skip to main | skip to sidebar

Blogs and the Updating Thereof.

Yeah, I don't know when I'm gonna finish writing about co-housing. There are certainly lots more things to say about it, since I only got halfway through writing up the tour. But July hit, and with it, madness: sorting, discarding, repairing, preparing. So much to get done in one short month, with precious little downtime. Yet somehow* it did get done, or done enough, and after bumping back my deadlines a tad, I got myself packed up and out of town. And that saga is addressed in detail on the New Blog, which you probably know about already but just in case, here it is. That'll be taking first priority over the co-housing posts, and I'm already behind over there, so: yeah. Co-housing can wait.

As previously mentioned, that blog won't replace this blog. That blog is intended to promote my project and my writing, with a view to eventually getting some paid work out of it. It's very self-consciously public and narratively focused; it is a specific thing and not other things. This blog continues to exist, and to be sporadic and amorphous, because we all need a place like that on the internet, or at least I do.

* "Somehow" mostly being "with lots and lots of help from friends."
Posted by Unknown at 6:37 PM No comments:

There's a particular type of 1930s apartment design you see a lot of in Portland.  It's single-story, typically brick, laid out in a row that's usually bent into an L or a C in order to squeeze as many units into the lot as possible.  If you've lived here, you know the ones; some of you have even lived in them.  In 2003, local developer and contractor Eli Spevak bought one of these old complexes at the edge of Peninsula Park, not far from I-5 in North Portland.  "We just sort of stumbled into it," he says of the purchase, and thus Peninsula Park Commons was born.  After renovations, he sold 5 of the 7 units, most to young families like his own, for about $80,000 apiece.  The 6th unit became a common area, and he and his wife moved into the 7th, where his daughter was later born.

The apartment courtyard soon bloomed with an ebullient communal garden, a certified wildlife habitat and the scene of many social gatherings for its residents.  Eli, who has met us on the street to welcome us in, explains, "Every cohousing community has its own themes, and our themes are biking and gardening."  Sure enough, the concrete at the base of a nearby bike rack is studded with ceramic tiles, lovingly hand-painted with bikes and tiny poems about riding them.  The residents of the community are having a yard sale in the courtyard today, and many of them stand smiling beside tables and racks of cast-offs.  We smile back, and I deliberately avoid looking at their wares.  (Now is not a good time to bring home more stuff.) 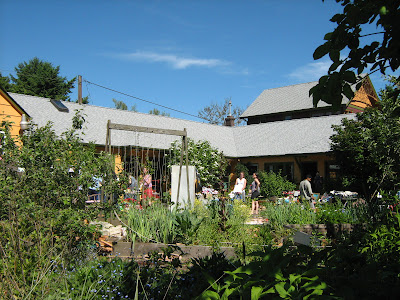 At Daybreak Cohousing, the first thing you inevitably notice is the brand-shiny-new, ultra-conscientiously designed architecture: warm bright colors, ample windows, spaces laid out to facilitate eddies and clusters of residents.  A gorgeous old maple towers over a tidy community garden and a circular play area, a perfect peninsula of fresh wood chips on a lake of green lawn.  There's a spacious rooftop deck with a hot tub and a fine view of the humped green spine of Forest Park.  Electronic fobs allow access to elevators and common areas.  The place strikes me as a tad on the posh side, an impression reinforced by the price sheet I pick up off a table in the Common Room: the cheapest unit available, at 665 square feet, is $225,000 (not counting utilities and HOA dues).  To me, that seems like a lot of money for such a little space. 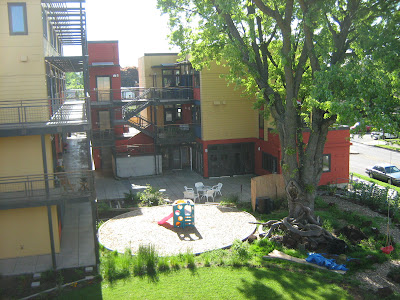 Yesterday I went on a day-long guided tour of four of Portland's six established cohousing communities. In a sense, this was Stop Zero on my intentional community research project, so I took copious notes, which I intend to share with you over the next week or so.  I'll devote a post to each of the communities I visited (Daybreak Cohousing, Peninsula Park Commons, Cascadia Commons, and Kailash Ecovillage), and also give you some highlights from the panel discussion we had with members from each of the six communities.

Cohousing is defined by the Cohousing Association of the United States, which organized this event, as "a type of collaborative housing in which residents actively participate in the design and operation of their own neighborhoods."  All four of the communities we looked at were urban in design, and thus "dense" in the sense that all residences were apartments within larger buildings.  They ranged from shiny new construction to slightly shabby rehabbed apartments, and from heavy membership involvement expectations to more of a laid-back approach.

We met in the common room of Daybreak Cohousing, a spacious multi-purpose area with lots of windows.  Bagels, juice, and coffee were set out for us.  The morning sunlight, which we've gone so long without around these parts, made the clean, warm colors of the walls glow.

Our guides introduced themselves: Terri and Kristin, Daybreak co-founders, and Ken, an early joiner of Cascadia Commons.  Then the 35-odd folks here for the tour made their introductions.  About half the group had carpooled all the way out from Boise, and some had come from farther afield, from Corbett to Ventura to Nashville, and an intrepid couple with a toddler who had come all the way from Australia. (I was intrigued to hear they were just winding up a tour of sustainable commmunities. More about them later, of course.)

Everyone there looked white and solidly middle-class, ranging in age from late 20s to 60s, with a ratio of roughly one single person for every couple.  A lot of them were empty-nesters who were looking to retire into cohousing.  I guessed that this group was a fair representation of local cohousing populations, and based on what I saw later, I wasn't too far off.

When asked why they had come, nearly every single attendee said s/he was there because of an interest in either beginning or joining a cohousing community.  I think I was the only one who didn't state such an interest (I said I was doing research for a book on intentional communities, which led to some interesting conversations later).  I kinda like the idea of cohousing -- it seems like a pretty decent lifestyle for those who can afford it -- but I don't feel a strong pull toward it.  So I didn't go into this expecting to find my dream lifestyle, but I was still intensely curious about these communities and what makes them work.

I've been sitting on these plans for over a year now.  Got so comfortable with 'em under my bum that it feels weird to have 'em hatch and walk away chirping.  But here they are (peep! peep!):

I quit my job. I'm still working, but my contract's up the end of June, and I'm not renewing it, and my employer knows that.

End of July, I'm leaving town. Renting the house out.  Gonna travel the country by car and bus and train.  Gonna visit some intentional communities (housing co-ops, ecovillages, organic farms, monasteries, boats) and see how people live there.  Gonna have some adventures.  Gonna write about my adventures.

I'd like the adventure-writing to eventually take the form of a book-shaped manuscript, and with a view to promoting such a manuscript, I'll be starting a second, more professional-looking blog in which to record said adventures.*  I don't particularly want to conglomerate everything I've written here and the persona I'll be promoting there, so this one will remain distinct, scruffy and personal (and irregularly updated).  For friends and e-stalkers only.

I have the roughest of timelines in mind: wandering the West Coast for the first several months, then heading eastward; visiting some places briefly, staying in others for a month or so to get something of a feel for life there.  I envision the whole walkabout as lasting maybe two years.  But it's all very flexible.  I'm entirely willing to get sidetracked by interesting possibilities, and if I get sidetracked by less-interesting necessities, well, that is also an acceptable outcome.  And if the book part doesn't happen, that's okay too.  At least I'll have had some interesting adventures.  Which is really the point.  Or one of the points.

So I've been pretty busy lately, working out details of these plans, and also doing the apparently interminable work of downsizing, and also still working full-time and trying to take good care of myself and get in quality time with local friends while I still can.  It feels like I'm trying to live in the future and the past and the present all at the same time, and giving all of them short shrift.  That's what I've been up to, and it's also my excuse for not writing about this sooner, now that my employer knows and there's no reason to keep it under feathers anymore.

* I've been experiencing some inauspicious writer's block in coming up with a name for this travel blog, or even for the project as a whole. Your suggestions are welcomed.
Posted by Unknown at 11:43 PM 13 comments:

The World Was Never Grayscale.

When I was in college, some of my friends occasionally bought black and white film for their cameras.  It made our pictures look ironically sentimental and remote, like it all happened such a very long time ago. 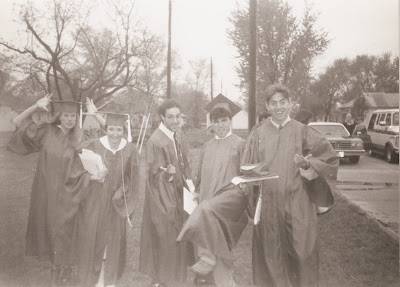 Nigh twenty years on, that irony has twisted around to bite its own tail.

Last weekend I heard some amazing stories, all of them true.  A couple of them had some striking parallels.

George Takei remembered standing at the front window of his home, watching soldiers coming up the driveway to take him and his family away.  It was 1942, and he was five years old.  Carrying only what they had hastily packed the night before, the family of five was transported to a "holding cell" (actually a stall in the stable of a racetrack) on their way to the first of a series of concentration camps, where he and his family spent the next five years of their lives.

Cora Smith* remembered wading in water up to her chest, clinging to her pregnant mother, as they tried to escape their flooded town in 1948.  The single road out was jammed with vehicles.  Cora, then a grade-schooler, was lifted onto the back of a Red Cross truck to be evacuated with a bunch of other children.  It took three days for her mother to find her again.
* I am not certain I have remembered Cora's last name correctly; I apologize if I've gotten it wrong.

Lindsey is a person who wrote some words. These words.